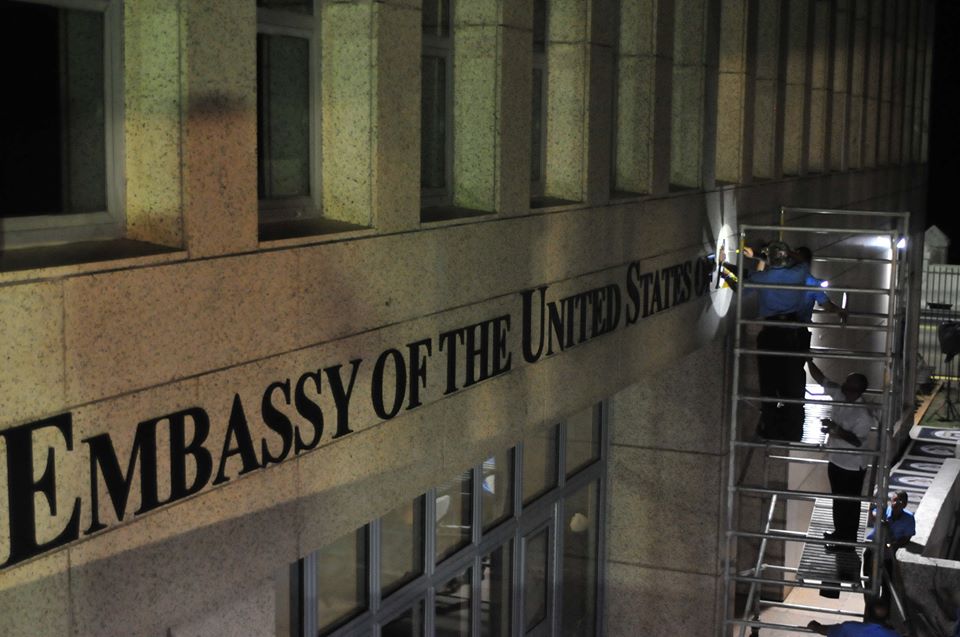 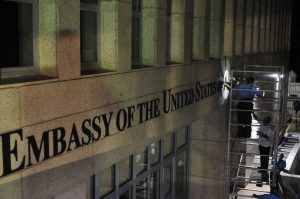 Workers add the “Embassy of the United States  of America” signage to the front of the building in the early morning before the opening ceremony.

When the United States Department Of State reopened their embassy in Havana, there was a lot of interest from broadcasters around the world.  Many setup live positions at the balconies surrounding the building, however with the limited space on the embassy grounds, the State Department came to Washington’s premiere satellite company for two shared uplink systems that would be made available to broadcasters. 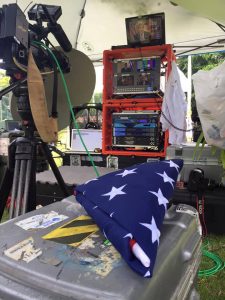 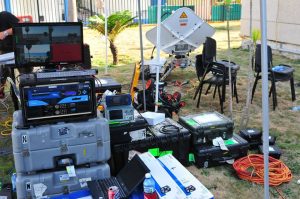 The State Department chartered a flight from Baltimore to Havana and we loaded two flyaway systems along with all the government’s equipment for the opening ceremony.  Each dish was setup for 4 HD paths, for a total of 8 paths coming out of Havana.  Like usual, we used muxes, DVB-S2, and H.264 encoding.

The State Department worked with both Eurovision and Associated Press to make 4 live shot positions (2 each) available to media worldwide.

During the ceremony, two of those paths carried the official switched feed of the program and a cuts camera, which was made available and carried live on many outlets worldwide.    DCI Teleport downlinked the official feeds for the State Department and fed them live via fiber for further distribution and webcasting. 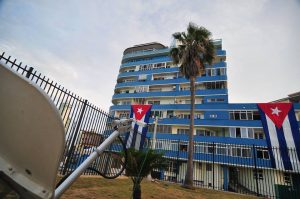 Some might say the Cubans “out-flagged” us.  Most of the US networks had live positions on these balconies and dishes on the roof.   Some used microwave to shoot from the media riser at the embassy. 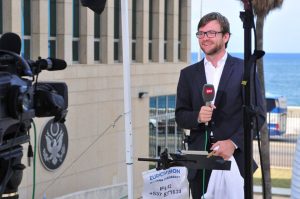 Live shot going to Europe on the EBU network via the DCI dish.

Crowd of Cubans watching the event across the street, and a camera platform for Cuban TV. 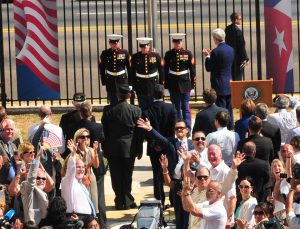 Secretary Kerry applauds as a cheering crowd looks on.  The 3 men facing the color guard are the US Marines who lowered the flag the last time, in 1961. They vowed they would return to raise it. 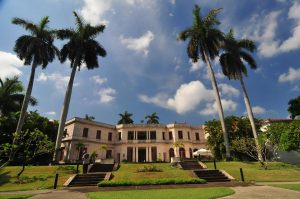 After a busy day for both uplinks, we packed up and headed back to DC the next day, another flawless field transmission in the books.

Contact DCI to see how we can put our expertise to work for your challenging satellite needs!

More photos of this event can be seen here.

Yesterday we provided a switched feed of the Capitol Hill riot hearing. We brought in all the pool cameras from our fiber network and cut a single feed for our client. ... See MoreSee Less

Another busy week for everyone at DCI providing satellite trucks, camera crews, satellite, fiber, and LiveU transmission services for CBS News Bloomberg Television PBS PBS NewsHour EWTN BBC and Newsmax in Washington, DC at the White House, Capitol Hill, and US Treasury Dept.
Our staff and resources are available 24/7 to provide the highest level of service to our clients. Give us your biggest challenges and we'll show you how to solve them. ... See MoreSee Less

Who do you call every year when you have a complex National 4th of July celebration in Washington, DC to cover with multiple cameras and communications needs. You call @DCITeleport of course. Using Nucomm Microwave and Ubiquiti 100 Mbps Wifi link for camera comms, we were able to provide a beauty camera shot from Arlington, VA and a camera jib crowd shot from the National Mall with near zero latency for the entire live production. Hats off to our trusted partners PBS and Capitol Concerts for putting on an amazing show and for once again putting your faith in our services. ... See MoreSee Less