Skip to content
DCI Prepares for Presidential Inauguration
The tradition of a parade down Pennsylvania Ave. from the Capitol to the White House on Inauguration Day dates back to 1829, with Andrew Jackson being the first president to get sworn in on the Capitol steps.  The first broadcast of an inauguration was on radio in 1925, when Calvin Coolidge took the oath of office.  The first televised inauguration came in 1949 with Harry S. Truman. 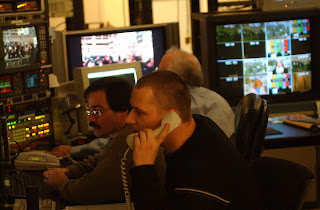 In 2005, DCI staff monitor the multiple microwave feeds in our old MCR room.
DCI also has a history of inauguration firsts, including the first in-motion high definition (HDTV) coverage of the parade route.  DCI has been involved in transmitting live in-motion coverage of the parade since 2005.  Our microwave receive point in the Clocktower of the Old Post Office Pavilion is central to this effort.  DCI also has a long history of custom-designing equipment for special events when there are no suitable commercial products, and in 2005 we built a COFDM microwave transmitter and amplifier system totally in-house to provide the network pool operator a perfectly clean feed from the moving “camera van”, which carried a rooftop camera platform and drove ahead of the parade route to broadcast live television images.  In 2005 we used receive antennas on the east and west faces of the Clocktower and a second microwave relay point on a rooftop across from the White House using DCI’s 45mbps ASI microwave links to achieve unbroken coverage of the parade from start to finish. 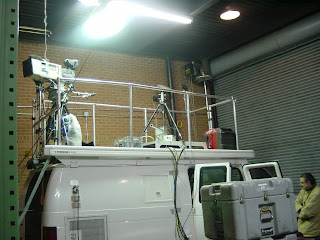 Network “Flash Van” for coverage of the parade route
In 2009 we used the same powerful in-house microwave system, although this time it was refined with a H.264 (MPEG-4) high definition television encoder for the first-ever HDTV in-motion broadcast of the parade route. 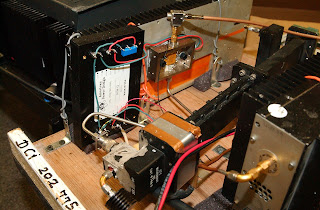 Lab-bench testing of our custom-built 15W micrwave transmitter.
For the upcoming inauguration, DCI continues this tradition of transmitting the best coverage of the parade for viewers worldwide.
To see how DCI Teleport can help you get the picture out with our state of the art microwave high definition transmission system, visit dciteleport.com 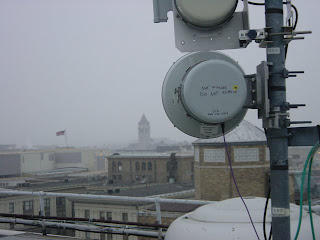 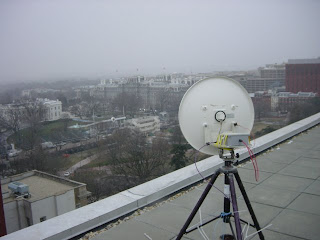