One of the biggest advantages of DVB (digital video broadcasting) transmission is the ability to transmit compressed video in a fraction of the bandwidth required for analog FM video.  While encoding profiles have improved over the years, taking off with MPEG-2 and moving on to the current standard H.264 (MPEG-4) video, the basic transport stream that contains that data has remained the same.  This signal is called ASI, or Asynchronous Serial Interface, which is based on a 270mbps clock, the same as the SD-SDI video interface, which allows it to pass through the same routers that handle SDI video.  While SDI carries uncompressed serial data at 3 common bitrates (270mbps for SD, 1.5gbps for HD, and 3.0gbps for 1080p HD) ASI caries a transport stream of compressed MPEG data.

One of the elements of the transport stream is Packet Identifiers, or PIDs.  There is one PID number for each component of a transport stream coming out of an encoder, commonly there are two- one for video and one for a single audio pair.  More complex streams can add additional PIDs for extra audios, closed captioning, or other ancillary data.

A transport stream analyzer showing the PIDs from a simple encoder.  The PID number is shown, along with its content and total bandwidth on a bar graph.  Here, the audio is 196kbps and the video is 4.2mbps, for a total stream of around 4.4mbps.

Typically, in the news gathering world, there is one encoder per signal on the satellite, known as a SCPC, or Single Channel Per Carrier.  On a busy satellite you may see dozens of these small signals next to each other.  A single truck can transmit multiple SCPC signals for doing multiple video paths.

A device called a Multiplexer can take several ASI inputs from several encoders, combine all their PIDs (reassigning if necessary to avoid duplicates) and output all that on a single ASI stream for uplink.  In the process it can drop PIDs, reassign them to different channels, even rename the channels themselves.   This is known as a MCPC or Multiple Channel Per Carrier signal.  This is the same technology DirecTV uses to transmit their channels to homes, although their muxes take it one step further by dynamically adjusting encoder bitrates based on content for optimal use of bandwidth, using a closed-loop system known as Statistical Multiplexing, or Stat Mux.  There are advantages to both SCPC and MCPC…

A complex MCPC stream containing multiple channels, some with HD H.264 encoding and 4 pairs of audio (8 channels) for surround sound or multiple languages, along with some standard stereo feeds with SD MPEG-2 video encoding, all within the same stream.  A multiplexer allows different kinds of encoded streams- from simple to complex- to be combined on a new stream.  “Unknown” represents newer audio and video encoding methods that this analyzer does not recognize. 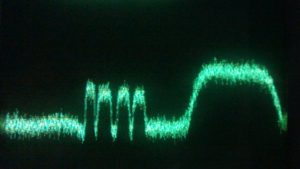 A spectrum view showing 4 SCPC carriers on the left, and one large MCPC on the right, which may contain dozens of channels.  Note- the size of a carrier does not necessarily mean its SCPC or MCPC, a full 36MHz transponder of HD MPEG-2 video is a SCPC, and a 9 MHz signal can contain a MCPC of several SD H.264 channels.  An ASI stream analyzer can show exactly what is contained in a signal.  DCI’s HD1 satellite truck and teleport have these advanced diagnostic tools.

Both of DCI’s trucks and flyaway uplinks are equipped with Adtec DTA-3050 ten-channel muxes.  They are not commonly used in the truck, but they are an excellent tool to have available.  The flyaway however, is designed to use the mux exclusively for multiple path transmission.

Benefits of mux transmission:
More efficient use of bandwidth.  Separate, individual signals must leave space between the carriers to avoid interference.  This is called guardband and is basically wasted space since there is no data being transmitted there.  A single 18MHz carrier will carry more data than three 6MHz carriers with guardband between.  Error correction is also not needlessly repeated.
Linearity.  This is the primary reason we use muxing on the flyaway. As more individual signals are fed into a typical tube amplifier, intermod is generated, which are spurious signals on harmonics of the primary signals.  As more signals are added to the amplifier, more intermod is generated, and the amplifier must be run at a lower power to avoid these spurious signals from causing interference to other users of the satellite.  So a 400w amplifier may only be able to use 200w before the intermod becomes unacceptable.  By using a single signal to carry the required number of paths, the amplifier can be run at a much higher level.  This is one of the main reasons we can operate so many paths off a small airline-checkable flyaway dish.
Less Equipment.  Using SCPC, each path requires a modulator to go with the encoder. The modulator takes the ASI and turns it into a radio signal.  Using MCPC, all the encoders feed into the mux, and that feeds a single modulator.  Of course, for redundancy we always carry a spare modulator, but it saves a lot of space to not need a modulator for every transmission path.

ASI analysis of a mux carrier from Lousiania PBS.  This mux also contains some data channels.

Disadvantages of muxing:
Availability.  Unlike individual carriers that can be turned on and off on demand, a mux is a single carrier and it is not possible to remove paths without reconfiguring the entire mux and changing the modulator and receiver settings for a new bandwidth.  In a news event, a client may want to add and remove extra paths as the story requires to save money on bandwidth.  Using a mux, that is not possible.  Muxes are best suited for feeds where the number of paths required is likely to stay the same.
The mux remains a very powerful tool in our kit to allow previously impossible results from our flyaway uplink. Contact DCI to learn how we can apply this and other technologies to your video transmission needs.