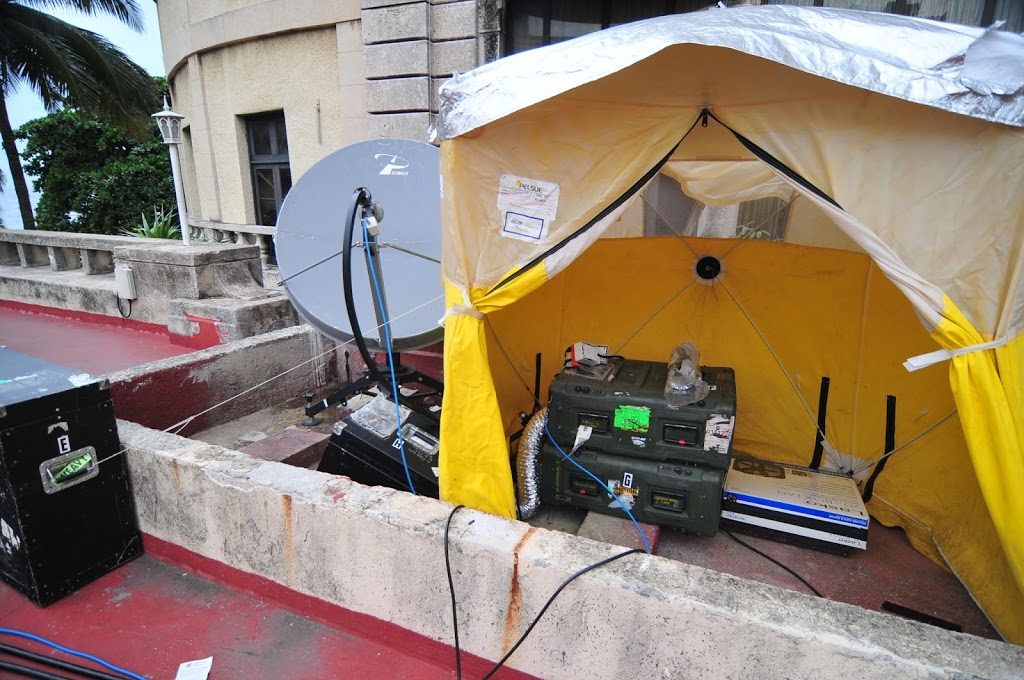 When the Vatican announced Pope Francis would visit Cuba and the United States for the first time in September 2015, we knew it would be a busy time for us.  DCI covered Francis’ election from Buenos Aires a few years earlier, and as the first pope from Latin American the Cuba visit would be big.

Having just returned from doing pool coverage of the US Embassy opening 3 weeks before, the flyaway kits were turned back around to head for Cuba.

The 1.2m Patriot system was setup as a 24/7 feed point at the Nacional Hotel in Havana, where we had 4 paths supporting live standup positions and tape feeds. 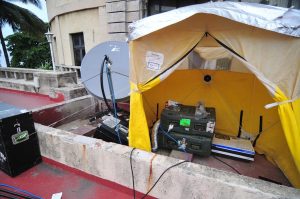 Setup went pretty smoothly, except for one transmitter that would turn on but not respond to any of the front panel buttons.  After being told by the manufacturer they would not help us because of export control regulations with Cuba, we had to fix it ourselves!  The problem ended up being a connector that came loose in shipping, a common problem when shipping sensitive electronics as baggage on airliners.  If you have ever watched a baggage handler throw your bag on the conveyor and cringed, it’s much worse when its a heavy and sensitive piece of satcom equipment!  Of course we always travel with 2 of everything for spares, so we had another working unit but after some minor surgery inside the amp we fixed the loose connector and were back online with a redundant set of transmitters. 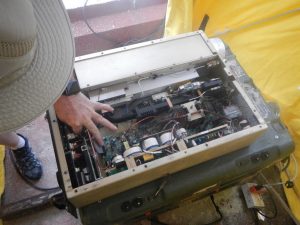 While the feed point dish was humming along, the “travel dish”, our modified Norsat system, set out across town for the live shots during the mass in Revolution Plaza.

There was a large compliment of uplink antennas here, from CNN’s 2.4m, 4-port monster down to a 1.2m Swedish fly-n-drive system belonging to Overon.  AP was in town from London with a nice 1.8m C/Ku Advent dish, and Reuters had a custom-made 1.0m system. 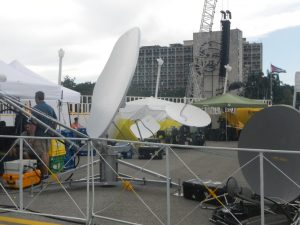 CNN’s 2.4m Ku antenna was running 6 paths plus comms, on both polarities of the satellite (4-port feed), very uncommon to see on a flyaway dish.

Since our setup was all L band, we mounted the dish on one side of the compound and instead of putting up a tent, our equipment lived under the press riser with two cables running to the dish- the transmit L band and the satellite return + IP signal for running the amps.  This system had 2 paths online.  We had a huge downpour of rain during setup day but for the mass the weather was perfect, and the pope drove right past our setup. 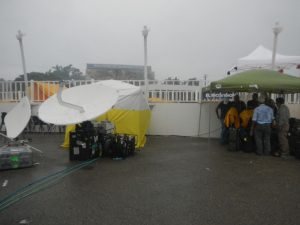 The difference between this mass and the one 3 years ago was very noticeable.  Pope Benedict said the mass at the base of the large monument and the general public was kept across the street, about 200 yards away.  This time the mass was said right in the middle of the plaza with the general public all around, and the pope spent almost an hour greeting people before and after. 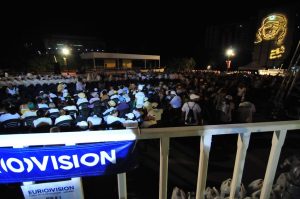 When we arrived at 3AM, the plaza was already packed. 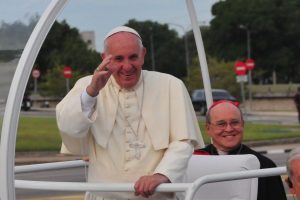 Unlike the previous mass with Pope Benedict in 2012, Francis did not separate himself from the public.

When we were finished here, we packed the dish and camera equipment up into vans for its overnight drive to Santiago. 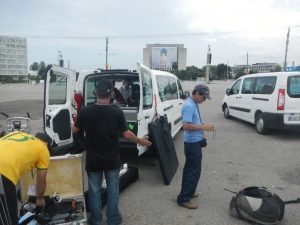 We were supposed to fly out on a 5:30 AM flight, however it kept being delayed.  To make it worse, the terminal was freezing and there was nothing more than some small snacks available.  The bathrooms were not even properly supplied! 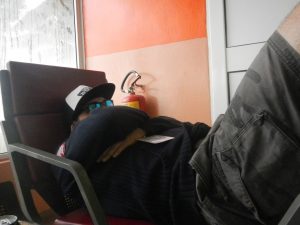 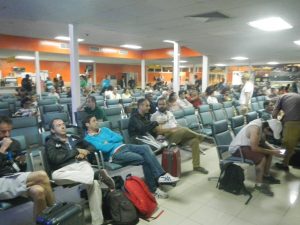 The flight was pushed back to 10:30, but that time came and went, and so did a 11AM flight to the same location, which really made everyone upset.  Our plane finally left around around 1:30 PM, about 8 hours late!  We had live shots that afternoon so we went directly to the feed point in Santiago and were on the air less than an hour later, which is pretty fast for a flyaway setup.  Our van drivers/technicians did help by running the fiber and unpacking everything they felt comfortable doing, so that helped a lot. 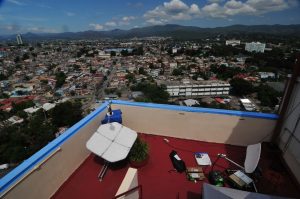 The dish was setup on the roof and too far to run L band cables to the control point inside the hotel so we tried a new technique- we used an available fiber to run ethernet control of everything upstairs like we were sitting up there, including the video router.  On another open fiber we ran the output of our multiviewer back down to the control point so we could see the quad split on the monitor. 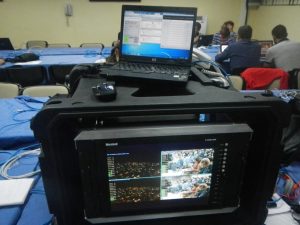 At the control point we had the quad viewer sent from the roof, plus full monitor and control of the router and uplink chain from the laptop.  We used a Fiber Media Converter to get ethernet control between the two points and a standard SDI video link to get the multiviewer back downstairs.

During the two days in Santiago we had two large rain downpours, but because when they happened we had only 1 SD path to do, we changed the modulation down to S2 QPSK 1/2 and even though we had a completely flat spectrum on return, they had a 11 dB margin back in DC!  This quick thinking saved the day during the rain storms. 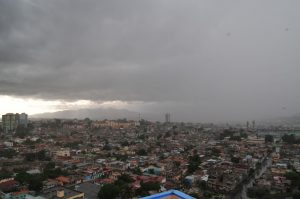 Rain storm moving into Santiago from the mountains north of town.

After we packed up the next day was spent visiting some of the sights around Santiago- El Castillo (a fortress overlooking the entrance to the harbor), the cemetery where many prominent Cubans are buried including Jose Marti and Emilio Bacardi (and most likely Fidel Castro will be buried here too) and the shrine at El Cobre, where the pope said mass the day before.  The flight back to Havana was later that day and the next we flew back to Miami and on to DC. 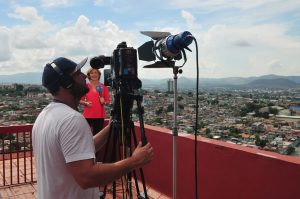 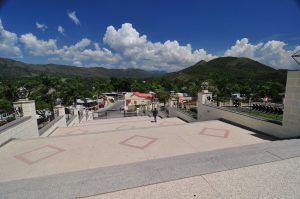 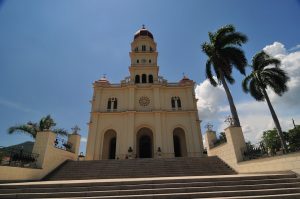 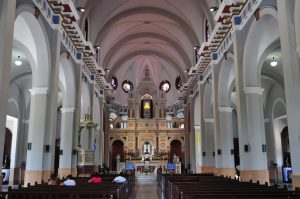 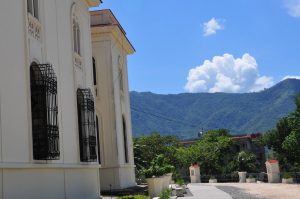 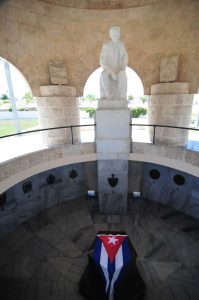 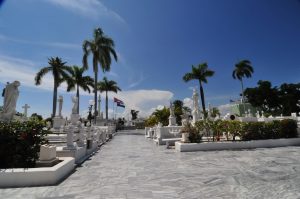 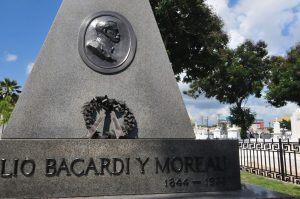 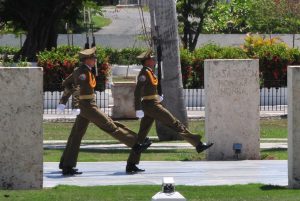 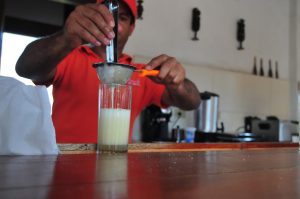 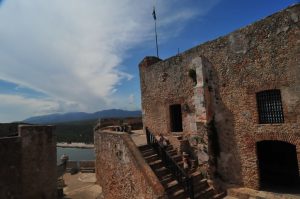 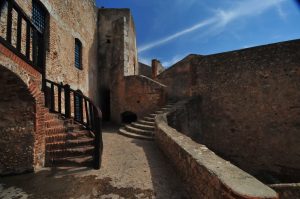 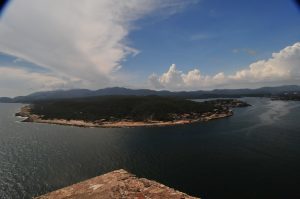